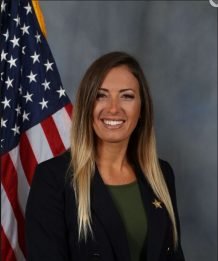 Corey Dobridnia has been employed as the Public Information Officer at the Walton County Sheriff’s Office since May 2015. In her former career, Dobridnia served as the weekend anchor for WMBB News13 in Panama City and worked as a one-man-band reporter covering Tyndall Air Force Base and Naval Support Activity Panama City among other assignments.

Dobridnia graduated from Embry-Riddle Aeronautical University with a Bachelor’s in Communication and earned a Master’s Degree from Florida State University, Panama City in Corporate and Public Communication. ERAU is also where she lettered in Women’s Volleyball.