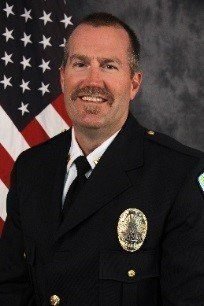 Cory Nelson is a Captain with the Madison, Wisconsin Police Department and is in his 30th year of employment.  He is assigned as the South District Commander.

He began his career in patrol for 9 years in a variety of positions; he then went on to serve as a narcotics and violent crime detective for 14 years.

He then was assigned as a Lieutenant as the Officer in Charge of the afternoon shift for the City for a year, followed by a 2 year stint in Professional Standards and Internal Affairs, then a year in Investigative Services.  During that time, he was in charge of the Violent Crime Unit, Burglary Unit, Special Investigations Unit, Gang Unit, Criminal Intelligence Unit, Criminal Intake Unit and served as the Assistant Tactical Team Commander of the SWAT team.

He is a Certified Public Manager through the WI Law Enforcement Command College.  He was also one of 10 officers selected to participate in the Law Enforcement Advancing Data and Science (LEADS) Scholar program through the National Institute of Justice.

Through a lot of time and effort, the police department was able to form valuable relationships with the Public Health Department, Dane County Human Services, Safe Communities, Parent Addiction Network, Madison Fire Department, WEA Trust, and a host of other agencies.  The MPD was also fortunate enough to partner with University of Wisconsin’s Dr. Aleksandra Zgierska, who is a nationally known researcher in the opiate treatment field.

The idea behind the grant is to funnel low-level property criminals, who are committing crimes to support an opiate addiction, as well as overdose victims, directly into treatment, thus bypassing the criminal justice system and the lifetime stigma of having a criminal record of opiate possession.  For years, we as law enforcement have looked at addiction as crime, we are now changing our thinking and looking at addiction as a disease that should be treated as such.

Several different programs around the country were looked at and we designed a program that we feel is the best fit for our community.  A number of hurdles have been thrown in our team’s path, but with a united front, we have been able to overcome them.  This is a unique partnership between the police department and community health organizations that had not been attempted before in our city.