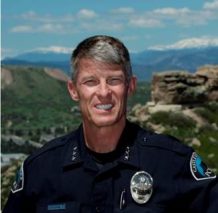 Chief Jack Cauley was sworn in as the Castle Rock Police Chief on Jan 3, 2012.  He began his law enforcement career in 1984, as a dispatcher in Kansas for the Lenexa Police Department.

In 1986, Cauley was hired as a patrol officer for Overland Park Police Department. He later became a detective in the Crimes Against Property Unit. By 1991, Cauley promoted to sergeant, serving the Patrol, Operational Support and Investigations divisions. His duties included investigator and officer-in-charge for the Kansas City metropolitan area’s Metro Squad. He also was a member of Overland Park’s tactical team.

In 1996, Cauley was promoted to lieutenant. He served in the Patrol and Administration divisions and worked as the emergency management coordinator. Cauley was promoted again in 2001 to captain and became the Traffic and Support Division commander. During his tenure in this division, Cauley’s rank was changed to major in 2002. As major, he served as division commander in Patrol, Investigations and Emergency Services.

In 2007, Cauley was promoted to lieutenant colonel assigned to the Operations Bureau, where he was responsible for the Patrol, Patrol Support and Tactical Operations divisions. He was later assigned to the Services Bureau, where he was responsible for investigations, dispatch, crime analysis, records and property, professional standards, personnel and hiring.