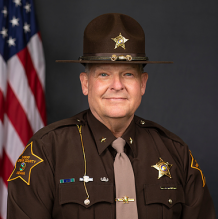 He was accepted to attend the Indiana State Police Explosive Ordnance Disposal Reconnaissance School, held at Camp Atterbury, Edinburgh. This school is the first step toward becoming an Explosive Ordnance Technician and is the training ground for future bomb technicians. In 1994 he was chosen to attend the six weeks FBI/U.S. Army Ordnance, Missile & Munitions Center & School at Redstone Arsenal in Huntsville, Alabama. During his 27 year EOD (Bomb Squad) career he was honored to receive the Department’s Silver Star Award. The Department presents the Silver Star Award for “a deed of personal bravery or self-sacrifice so conspicuous as to clearly distinguish the individual. The deed was intelligently performed; self-initiated or reactive; and may have involved a risk of serious injury or loss of life to the recipient.”

He has also served on the ISP Clandestine Lab Team, which is charged with the responsibility to render meth labs safe and collect evidence to prosecute meth lab operators.